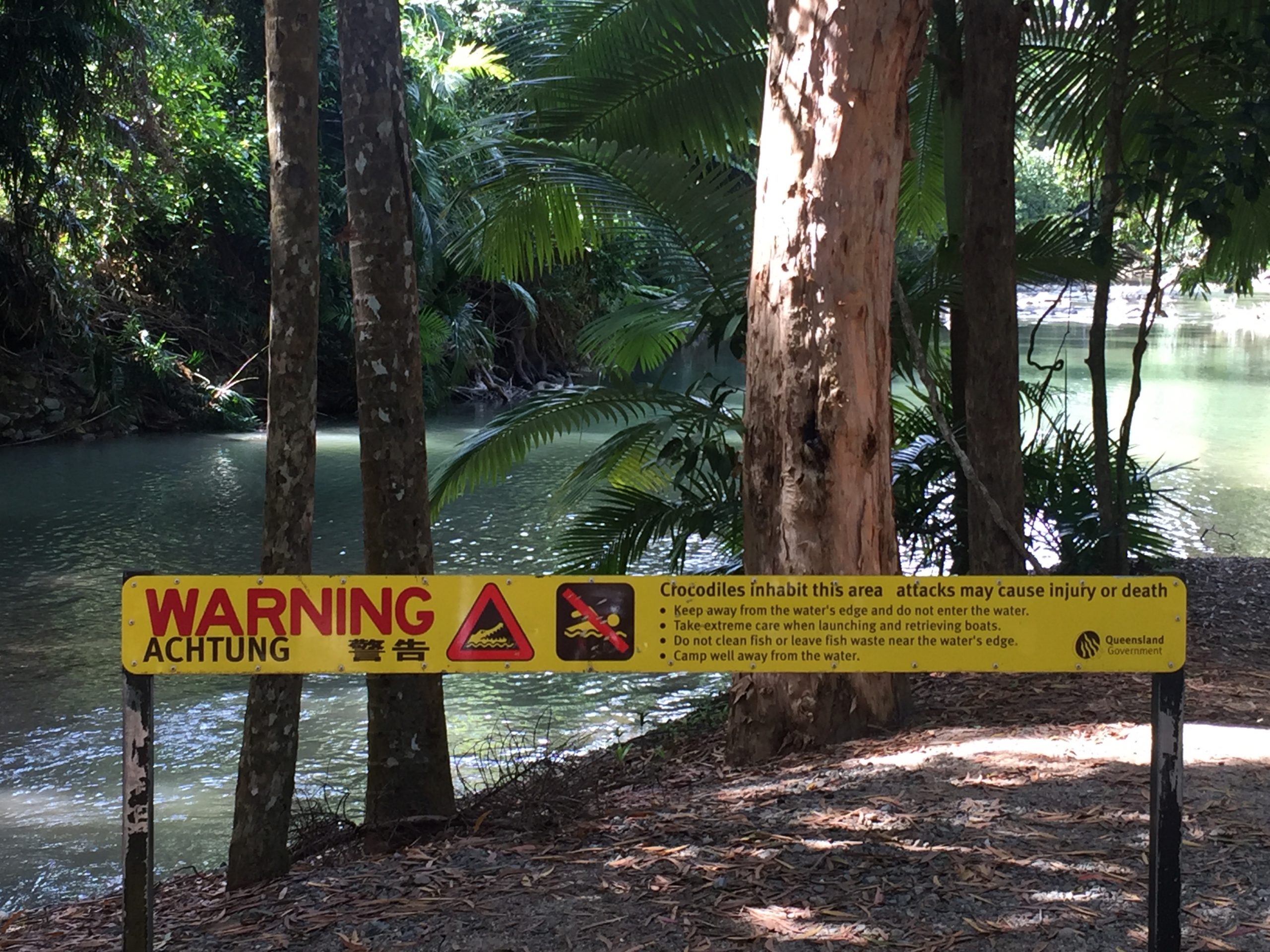 Last month I had a truly wonderful trip to the pointiest bit of Australia, to attend the Laura Quinkan Indigenous Dance Festival. It was so enjoyable that I’ve been racking my brain about how to turn it into an interesting story. Nobody really wants to hear about everything going smoothly and someone else having a great holiday. That’s why we don’t have slide shows anymore.

Finally I remembered there were a couple of amusing incidents though. They were almost submerged under the overwhelming, but somehow indescribable, impressions of rich culture and spectacular scenery of FNQ (Far North Queensland).

Three or four days’ drive, and 2,150km, to be precise. I drove up with my friends in their 4WD. The trip was indeed long, but we had plenty of fun adventures along the way.

I think it was sometime on the second or third day of driving when we were stopped on the highway by a long line of traffic. All the silent engines and people leaving their cars indicated it would be more than a minor delay. It turned out there has been a serious accident ahead and it would take some time for the carnage to be cleared.

This was not only very unfortunate for those involved in the accident, but not great news for me. I had been very much looking forward to our next toilet break.

My friend Sam and I joined the people walking up and down beside the cars, hearing rumours about the accident and filling in time. I was also on the lookout for some dense foliage to hide behind.

Lucky me! Only a little way up the highway was a side street with no cars and plenty of bushes. I relieved myself of liquid waste and headed back to the car, past several humorous enquiries if I was feeling better now.

The delay turned out to be a little shorter than expected. An hour later we were about 50 kms further along the road, when I made a disturbing discovery. My phone was missing!

All the time I looked under the seats and in every crevice of the car, I knew the annoying truth.

I must have dropped it peeing in the bush.

There was no way we would turn back now. I tried to resign myself to a few weeks of major inconvenience, followed by outlaying the money for a new phone. I was supposed to meet my family in Sydney after this trip, and with everything changing almost daily due to Covid, the timing was far from ideal.

Discussing my options, Sam came up with an idea which seemed crazy at first, but the more I thought about it, the more I thought it could be worth a shot. Our other friends were also driving up for the festival, a day or two behind us. What if we asked them to look for my phone?

The only reason I thought this might work, was because I’d been in an uncharacteristically observant state of mind. I remembered the name of the side street, how far I was from the corner and the even the tyre and brand of beer can I could see from where I squatted. If I’d observed a crime that day I would have been a great witness!

So, to cut to the chase, our friends kindly agreed to stop at the site I explained. They rang when they arrived and within two or three minutes they actually found my phone! After a night in the dirt, dangerously close to my wet patch, and through the dew of the morning, it still worked and the battery wasn’t even dead! I couldn’t believe it.

I made it to the festival, complete with a device to take photos, but I won’t bore you with how inspiring it was…

… except just to say it showed me a few of the reasons Australian Indigenous people have the longest, continuous ongoing culture in the world. My impression is that their communities are held together with both art: music; dance; painting; story-telling, and inclusion. Everyone joins the dance, from tiny babies in nappies to old aunties who shake a leg under the sun until they’re exhausted, and someone brings a chair into the ring. There they sit, happily in the middle of all the action. One team was made up of incredible deaf dancers. It reminds me of Baker Boy’s song, “Meditjin”:

“You got stage fright? No problem.

You got neck brace? No problem.

You got two left feet, can’t catch that beat?

Take a deep breath coz I got this yo.”

Music is the medicine available to everyone.

Anyway, back to the funny stuff…

After a couple of days enjoying the dancing, it was my birthday. We had been to visit the nearby Quinkan rock art, which is at least 15,000 years old. Before we returned to the (dry) festival, we decided to pop in for a quick one at the Laura pub.

The only other patrons there happened to be Australian music legends Yothu Yindi, who were playing at the festival, plus some random guy who’d just landed in a little red and white plane.

The pilot was looking for a lift to the dance site. Some of my friends agreed to take him, so he bought us a round of drinks. I thought it was strange that he didn’t have a ticket for the festival, which was sold out, and didn’t seem to be too interested in what was going on there. I didn’t catch the dude’s story, but to me he looked like a middle-aged, conservative, grazier-type.

My friends somehow managed to sneak him in through the gate and we never saw him again. With no mobile phone reception, I don’t know how he planned to find his lady friend amongst the thousands of attendees. I suppose they worked it out.

Around ten the next morning, we watched the little red and white plane swoop low above the dance circle and disappear into the blue.

And I guess that’s how tinder dates work in the outback.

The rest of my holiday was filled with more amazing dancing and art, waterfalls, rainforest, rivers, beaches and fun times. Blah, blah, blah.

Let’s hope my next trip is a bit more like this one of Phil’s. I know it’s far more interesting to read about everything going wrong 🙂

6 thoughts on “Squats, Dances and Dates in FNQ”