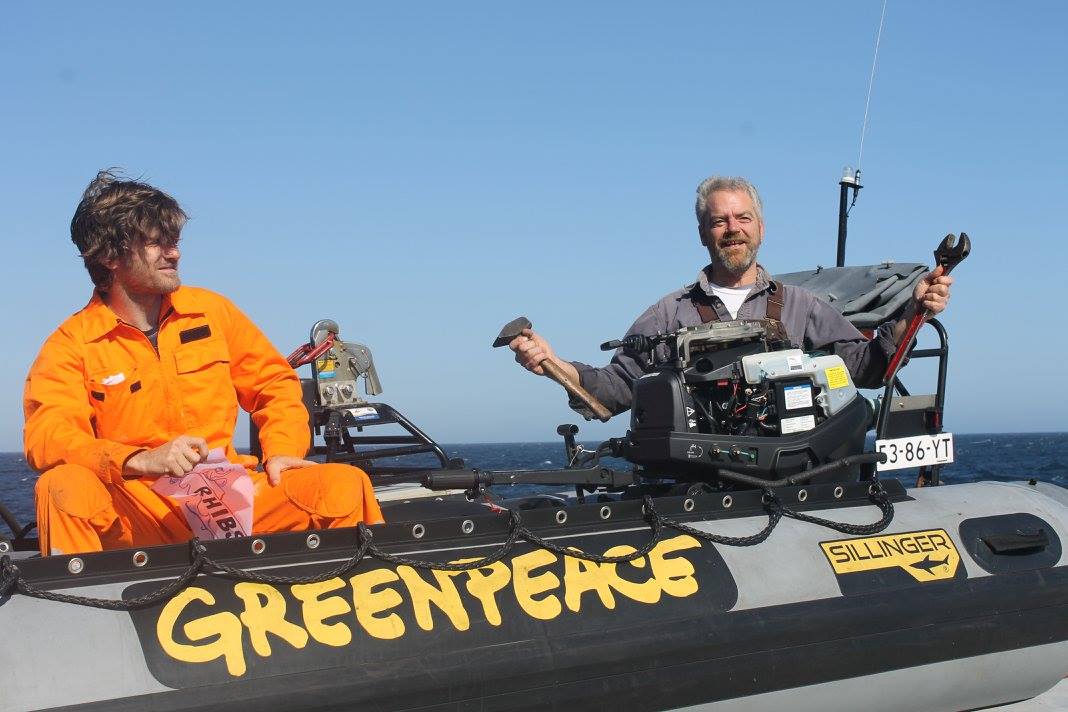 Hang 100 banners successfully and no-one notices. Get one wrong and THAT’S the one they remember

In January 2002, the Rainbow Warrior II arrived in Istanbul at the invitation of the Greenpeace Turkey office. I love Istanbul. I love Turkey. As usual, I was sailing as boat mechanic. The GP Turkey office was hoping to draw attention to ship-breaking operations on the Bosphorus. These yards had been operating for years with little or no government oversight.

Ship breaking, for the uninitiated, is when a ship reaches the end of its useful life and is sold for scrap. Typically this happens in developing nations with no environmental regulations. While all the steel and other metals are valuable for recycling, there are tonnes of hazardous materials and liquids of no value. These are frequently released into adjacent waterways or dumped on a convenient shoreline and abandoned. At that time, Turkey was one such country.

The Target and the Plan

The GP Turkey office had selected a ship-breaking yard in Aliaga, conveniently located just south of Istanbul and north of Izmir, a popular tourist destination. There was a new Turkish action co-ordinator and a GP Turkey veteran named Tolga as the campaigner.

The action plan was for two teams to board the ship. Each team would hang a large banner and lock themselves to a convenient anchor point. I was volunteered to climb a ladder somewhere onshore to hang a banner as well. No problem, I’m good at ladders.

Regrettably, the action co-ordinator had no photos of the site. We needed to know where to land the boats and what access we might have onto a ship being scrapped. I was also, not unreasonably, curious about this ladder I was to climb. Ship-breaking yards are a mess of sharp, pokey, sticky-outy, metally things which are very bad for inflatable boats. We needed to see the site.

The reality of it and scouting.

A call was made to the ship breaking yard, informing them that a wealthy yachty (me) was looking to purchase bronze portholes for a yacht I was building. Would it be okay if we were to visit to see what they might have available? The answer was yes. They had plenty of portholes of many sizes.

Weset a time and arrived the next day. I spent quite some time examining and measuring their piles of portholes, waiting for our escort to get bored. He got bored and we told him we could find our own way out.

Once alone, we went to the shoreline to scout a suitable landing site for the boats. We found only one section of beach not littered with sharp, pokey, death-to-inflatables, spot. Check 1 off the list.

Then we found two access points to the ship in question, (Swiss owned, Star of Venice) for the large banner teams. Check 2 off the list.

Now I wanted to see this ladder I was to climb. Well, I guess Tolga and I had different ideas about what a ladder is. What I was to climb was a forty meter, tubular frame, mobile boom crane.

The tubular steel was about 120mm in diameter and each horizontal rung was approximately 1.5 metres apart . It was greasy, dirty, salty and very, very rusty.

This would be a very risky and greasy 40 metre free climb to the boom end. A bad idea. But then again, I was young, male and stupid. I reckoned I could pull it off.  And in any case I had already agreed to do it. I couldn’t back out now I had my reputation to consider!

Making banners is a lot of work. First they must have hems sewn around their edges, then grommets installed at their corners and, if necessary, grommets along their edges to which ropes can be attached to secure them. In a sane and rational world this is done weeks before in a relaxed and stress free atmosphere.

But in Greenpeace, activists need to be sleep deprived and completely knackered on the day of an action. To achieve this we have an age old tradition that one should never make a banner until the night before you need it.

This night was no different. Two large banners for the two teams boarding the ship. Each activist was to have a small personal banner they could display should opportunity arise, plus one for me.

Getting the boats ready for action and stabbing myself

Because we had planned a pre-dawn action each boat needed to have working navigation lights. In this case, a pole that attaches to the back of the boat with a port and a starboard light plus a white light at the top of the pole. I tested the three we needed and none of them worked. Two needed to be completely re-wired. To do do this I needed to remove many cable ties, so I decided to use my pocket knife and I was thinking “this is stupid Phil!, you should get side cutters or you might stab yourself.”

I chose to stab myself.

Not too badly, It only needed two stitches from the ship’s doctor. Then I finished the navigation lights.

After just a couple of hours of sleep I had to prepare my climbing gear, rope, harness, webbing, anchors, carabiners, etc. Plus I needed to prepare the banner.

The banner I was to hang was approximately 1.5m square. Not very big. Easy peasy. But there’s the rub. When copying many banners the easiest way is to paint one, then lay over the next blank one and trace the letters with a felt pen, and then pass it to someone to paint in the letters.  The banner team had made more than we needed. There was a stack of them ready to go.

With the help of Leslie (ships’ grandmother and a wonderful person) who was on watch that night and the only other person awake we went to prepare my banner. We took the pile of banners, laid them on the deck and proceeded to make an accordion fold of the top banner.

Here is where it all started to go horribly wrong.

I could read the banner beneath through the one on top. It was the correct message. I was focused on getting the banner folded correctly so it would pack well with my gear and be easily deployed on site. What Leslie and I failed to notice as we were folding the banner, was that the lettering, seen below, was not coming along with the banner.

But, my god, we’d folded that banner well.

Pre-dawn and we launched the boats and made our way down the Bosphorus to the ship-breaking yard. Dave Haussman (ships’ electrician and awesome fellow) was to be my safety dude. Leslie was our driver.

Dave and I were in the first boat as we needed to show the other boats where the only safe landing spot was. There was only enough room for one boat at a time, so the two other boats had to stand off while Dave and I disembarked and Leslie took the boat out of their way.

Dave and I had the longest distance to cover to get to the crane. The other two teams were disembarked next to the target ship. Dave and I jogged up to the crane ladder.

I stared up into the void of the crane boom as it disappeared into the darkness.

At each and every step up the rungs,  I cursed Tolga. This was not a ladder. It was a very dodgy climb, but somehow I made it to the top. I set my anchors, attached my rope and descender, and swung out, trusting my gear. All good. I descended to what was, I thought, to be an appropriate height and set about preparing the banner.

Anyone who has had to deploy an unwelcome banner knows there is a magical moment when you know everything is ready and in a few seconds you will triumphantly display your message to the world. I was at that very moment.

I broke the masking tape binding the banner, and set it free for the whole world to see.  and recall yelling:

‘’YEAH’’ which immediately turned into ‘’NOOOOOO.’’

To my absolute horror, I was looking at a perfectly hung 1.5 M square of blank yellow banner.

With absolutely NO FUCKING WORDS.

I could see the pencil outlines where someone had traced the lettering. The previous night I had been using a big fat felt pen which I had kept in a side pocket of my pants. Frantically I searched for it, thinking I might save the situation if I could only get some words on this stupid banner.

I looked down to see Dave just shaking his head in disbelief and the videographer who had followed us lowered his camera and hurried off to see if there was something more worthy of his time.

I hit the descent lever and got off the rope so Dave and I could get as far away from this train wreck as soon as possible.

Dave and I got to the landing site to find the other two teams had also arrived. There had been a lot of wind that day. No sooner had they deployed their banners than the wind ripped them apart. There was no reason to linger so we got back in the boats and headed back to the ship.

As my boat came up to the ship’s side, Sean Nailer (chief mate, funny as hell) was there to help me aboard. He was grinning widely and said to me as I reached the deck :

I didn’t immediately appreciate what he could possibly mean by that remark. It did not take me long to understand. I had given him and all who knew me a wonderful opportunity for taking the piss out of me. And take it they did.

-“Hey Phil can you translate this?’’

-(shows me blank piece of paper).

-“Hey Phil can you see that thing over there?’’

ad nauseum. Oh how they laughed.

Over the next few days I received a lot of emails with no content. One day I walked into the mess during lunch and said aloud :

‘’I have been receiving a lot of emails with nothing in th………,’’ to a sea of grinning faces.

This went on for quite some time. But in my defence, mine was the only banner to be seen, still in place. All the others were gone.

Until the writing of this confession, I have claimed plausible deniability because there is absolutely no photographic evidence.

Several years later I returned to Istanbul. Young volunteers and activists who were not there at the action said to me: “OH! You’re Phil? Blank banner Phil? You’re famous.” I think they meant infamous.  But what the hell.