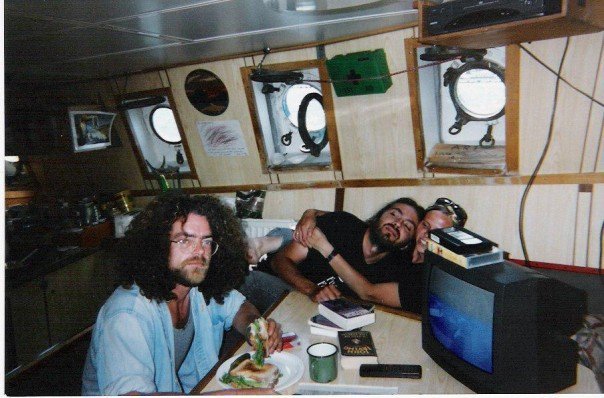 Who, what or maybe where the F**K is that?

You don’t have to be crazy before you camp with us, we will train you!

Before going to BC for the first time, I spent two weeks in the Costa Rican peninsula of Osa. I thought it was the most beautiful place I’d ever been, until I found myself in British Columbia.

We were working in an area officially named the “Mid-coast Timber Supply Area”. An inspired name, no? I guess the gov’t thought its’ value to the planet was trees only.

With help from like-minded people it was renamed, “The Great Bear Rainforest”. Years of campaigning and great images brought this area to global attention. It remains, in my mind, the most pristine and magnificent place I have ever had the privilege to visit. Much of British Columbia is inaccessible without a boat or a seaplane. That’s a good thing for the eco-system. Sure, it rains a lot. It’s a rainforest. But there is no such thing as bad weather, just the wrong clothing (someone once told me).

I was working on the Greenpeace ship, Moby Dick, a North Sea beam-trawler, 27 metres and 500 tonnes. My position was assistant engineer. There were only two engineers. Myself (not an engineer), and the colourful and proper engineer: Tapio from Finland. At 5 o’clock each day (beer o’clock) Tapio was fond of saying “I am Finnish, he is Dunn”. Hilarious, no? My background was graphic design, but I had once disassembled a two-stroke engine when I was 16 years old, so that made me the expert on the ship’s inflatable boat engines. Tapio taught me a lot about ships’ engine rooms and engineering systems as well. He also taught me how to be truly grumpy. To this day my grandson calls me Grumpy Phil. Instead of Grampa Phil. I am fun but firm.

After four months on board, I was home for two weeks when I was asked to return to BC to co-ordinate an action in Haida Gwaii (then called the Queen Charlotte Islands). Haida Gwaii is a beautiful archipelago off the coast of British Columbia, home to the Haida 1st Nation’s people.

The ship “Haida Brave” (obscenely named) was the worlds largest self unloading log barge. In essence, the trees are cut down, brought down to a convenient cove not far from where the logs are cut and piled up for loading onto ships. The Haida Brave ship is self loading and unloading, in that it has cranes with which it can load itself and by flooding the port side of its hull, it tips over so far that the mountain of logs on its deck slide off into the water at the log processing facility. This ability makes the whole process alarmingly efficient. Quite the spectacle.

Sounded like fun to me! Sure, count me in. And off I went. I had had previous experience at Greenpeace in pretending to know what I’m doing.

The Team and finding a camp.

In Vancouver, a team of activists were assembled, and all (nearly) the requisite gear loaded into a rental van. They made their way north to Prince Rupert to take the ferry for Haida Gwaii. Knowing the people in this van and the length of the journey, I am jealous because I bet it was heaps of fun and laughs. (I know there must be some funny stories).

Haida Gwaii is where I joined them. I knew most of them well from the GP door to door canvass or from previous work with GP. They were all Canadians –oh and some German guy. The German man of mystery who seemed to fill no purpose, but given that we didn’t know what we were doing, he fit right in, I guess. Apart from Tamara and the mystery German, the rest of the team were formerly door-to-door canvassers for Greenpeace. We’d knock on peoples’ doors and try and persuade them to give a donation. The team consisted of Tamara (forest campaigner), Phil (action co-ordinator), Tanya (activist-boat driver), Bernard (activist), Maxine (activist), Stuart(activist), and a few others my brain refuses to recall.

This was also where David Roberts handed over the reins to me. My initial reaction to him was: “my god, what a wanker.” This feeling was confirmed when he mumbled something about “important paper work in Vancouver.” His parting words were: “Just fuck with them.” An inspiring handover.

We were given the location of the log loading facility from “GP experts”who were to provide logistics. I’m still looking for those logistics, I’m sure they were there somewhere. Basically, we were dumped into the forest and told to do “something”.

Masset Inlet was our destination. We made our way inland to find a suitable and hidden location to set up camp. Eventually we found a site not too far from the loading dock. Happily, it included an abandoned, rotting but roofed, structure which served as our kitchen/dinning area. It was so very there. Old growth trees, moss and lichen 10 – 20 cm thick. These absorbed so much sound that it had a strange effect on the acoustics when listening to people and things. Or perhaps that was the beginning of my ever-increasing deafness. I blame the moss. “WHAT?” And, there was a beach with a suitable boat launching site for the two folding inflatable boats and engines that we had brought with us.

All Greenpeace actions are meticulously planned and researched and this was no exception.

It was suggested that the ship might arrive on a high lunar tide. I was provided with a tide table, printed on a paper place mat from a restaurant on the mainland 300 kms away in Prince Rupert (see map). The tide table was for the previous month. The placemat was as useful to our needs as a fish needing an umbrella. Our camp was on the shore of Masset inlet. A large inland saltwater lake connected to the sea by a 30km natural channel. I put sticks on the beach each day trying to gauge the height of the tide. Not being much of a lunarian I failed to make much sense of the tides or the lunar cycle.

We made ourselves comfy in our camp and took daily trips down the beach to scout the log loading facility.

I’m guessing the log loading facility was about 1.5 – 2 km from our camp. Like too much of BCs’ coastline, the beach was piled high with logs that had escaped during transport. One does not walk along the beach so much as balance along one beached log to the next, hoping not to fall in between them. This makes the journey arduous, long and tiring. We did this everyday because we did not know what else to do. But it did help us invent scenarios for hypothetical actions that we may or may not ever do. We had an old aerial photo of the ship. The photo was good for identification purposes, but it lacked detail with respect to getting activists on board. We did note that the log loading facility was actively piling logs for something, and we hoped it was for our target vessel.

Having scouted the location we set work planning what form our action would take. We had no original ideas or plans. Get in the boats and go fuck with their shit. We did make some banners, just in case, and that took some time in the forest, so we were occupied for a few more days.

For this action the Moby Dick had acquired a night vision UV monocular. It was state of the art and very cool. Captain Bart decided that these should remain on the ship where he could ensure their safety. The monocular was expensive and pretty cool, so obviously not to be used by some hippies in the forest who might have a real need for them.

We had also acquired a satellite phone. This was an enormous suitcase model and weighed about 15kg. The height of technology at the time. It came with a compass and the lid was the transceiver. The lid of the suitcase had an indicator showing the user how many degrees off the lid should be from horizontal. It also came with a sky chart telling the user which satellites might be available in your latitude/longitude. So, aiming the phone was critical.

I was to phone the ship every night at 20 :00 to give and receive updates. The ship’s satellite phone receiver was beside the chart table. So often someone would accidently bump the handset slightly off its cradle. This meant that the phone would not ring even though I could hear Bart and the chief mate chatting. Many were the nights when I set up this impossibly cumbersome satellite phone on the beach and made a successful connection, only to hear Bart and the chief mate moaning about general GP stuff or my irresponsibility in not calling them on time. Meanwhile I’m screaming into the phone in the vain attempt that they might hear me. Usually, it worked and I’m glad we had it with us.

One such failed comms meeting coincided with a full moon and a distant rainstorm. This was everyone’s first witnessing of a rainbow by moonlight. A Moonbow we called it. What better event/omen to energize a group of eco-activists. Okay, drugs and alcohol may have been involved but a moonbow is an awesome thing if you’ve never seen one. Even if you have.

We were feeling great.

I’ll leave the story here and try to remember what happened next.

6 thoughts on “Haida Gwaii and the Haida Brave – take 1”